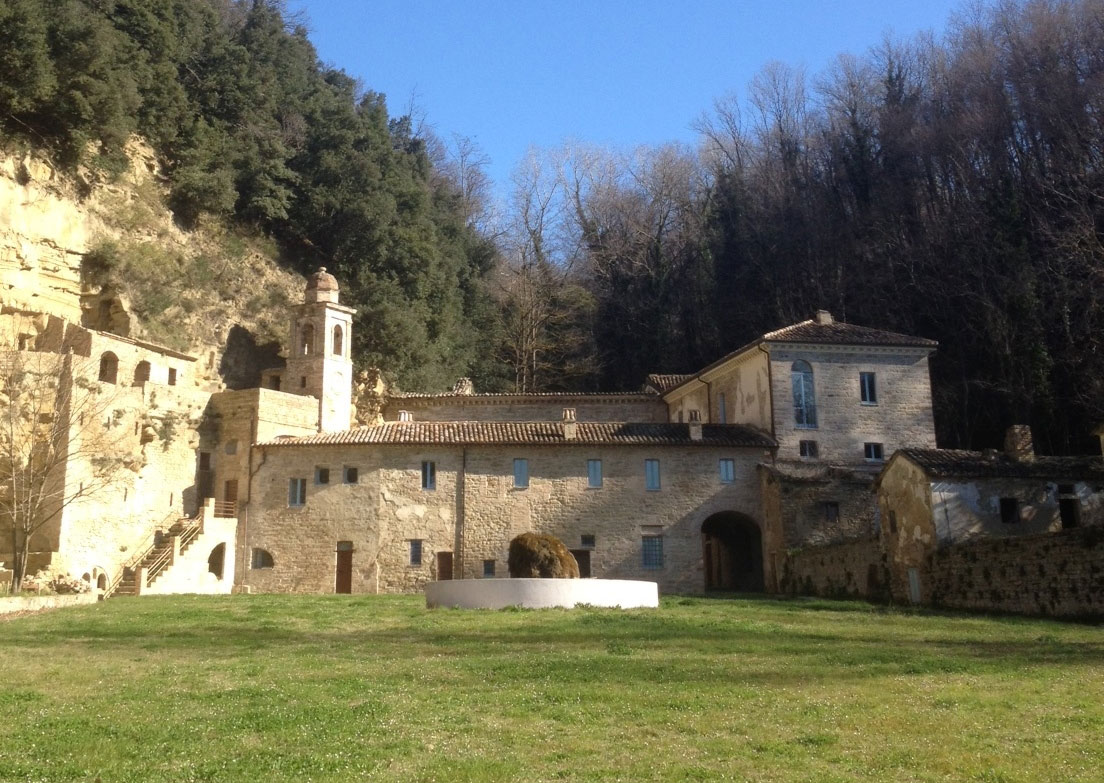 The Hermitage (Eremo) is a monastic complex dated back to the beginning of 13th century. The recent restoration let it come to a new life after years of negligence and abandonment.
The Hermitage is protected by a pure 60.000 square metres wide forest with countless botanic species, coming from all over the world; it houses centuries of history and culture representing its vocation for silence, serenity and peace.
It is the ideal place, where people can find their own space, away from the frenzy of modern life, to live a unique experience, where silence is broken only by the sound of the leaves moved by the wind, by the flowing of the stream that crosses all the wood or by the twittering of the birds.
It’s ideal as a congress centre, a beauty farm, a wedding location or a five stars hotel.

Historical notes
The Eremo delle Grotte (Hermitage of the Caves) is also known as Eremo dei Frati Bianchi (Hermitage of the White Friars).
The first traces regarding the Hermitage, situated in the Gola del Corvo (Gorge of the Crow), between Cupramontana and Poggio Cupro (Marche region), date back to the 11th century, when, in the caves after which the hermitage is named, the monks were leading a life devoted to prayer and penance. In 1520 the monastery gave hospitality to Ludovico and Raffaele Tenaglia, that later contributed to the creation of the Order of the Capuchins. The complex was restored at the end of the 14th century by the monk and architect Apollonio Trucchi.

Following the Napoleonic occupation and a decree, that in 1866 abolished the religious congregations, and also because of the destructive interpretation of the laws during the Unification of Italy, the monastery was sacked, loosing several precious works of art. When the monks came back, after 1866, there were neither the rich library nor the majolica altar of the Della Robbia school. Today part of the artistic and cultural inheritance of the Eremo dei Frati Bianchi can be seen in the municipal library of Cupramontana, in the Gallery of the Uffizi in Florence, in the art gallery of Jesi or in private collections.

Although the place has always been so important, the hermitage of the White Friars has been neglected and abandoned for years, because of the human carelessness; walls and ceilings collapsed more and more and the luxuriant forest, including those trees and plants in it, which had been carefully selected by the monks, is now endangered by negligence.

From 2000 Eremo s.r.l. has been working to safeguard and restore the monastery, that is a piece and a symbol of the history of Le Marche region and Italy itself, a symbol of civilization and religious faith.

Thanks to the restoration the Hermitage revives now: it houses conferences, cultural events. Expositions and prestigious ceremonies.